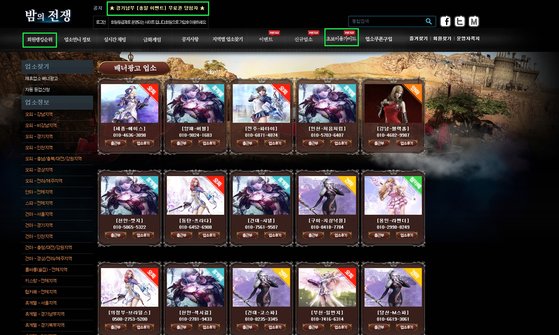 The operator of the nation’s largest prostitution brokerage site, “War of the Night,” known to have joined by about 700,000 people, has been forcibly repatriated from the Philippines to Korea. It’s been 10 months since he was arrested.

The National Police Agency announced on the 22nd that it had forcibly returned A (40s), the operator of “War of the Night,” and B (20s), the other telephone financial fraud master, to Korea on the 22nd.

The National Police Agency launched an investigation after obtaining intelligence on the “War of the Night” site in 2019. Since then, it has closed four sites and arrested 19 people, including a domestic general manager.

In addition, a total of 2,522 related people, including owners, employees, and sex buyers, were arrested by cracking down on 789 businesses posted on the site.

However, A had already fled to the Philippines in 2016 when his accomplice was arrested for another case. Although the co-operator was arrested in August 2019, he had been on the run.

The National Police Agency applied for redemption from Interpol’s secretary-general to catch A, while also requesting active cooperation from local law enforcement agencies.

The Korean Desk in the Philippines continued to collect intelligence related to A, and succeeded in arresting him in September last year in cooperation with local investigative agencies, although it was difficult to track down due to the worsening COVID-19 situation in the region.

In September last year, the police finally succeeded in catching A after cooperating with local investigative agencies. The Philippine authorities approved the deportation of A last month, and the police dispatched a convoy team to bring him to Korea.

Meanwhile, B, who was repatriated with A, served as a telephone counselor in a telephone financial fraud crime organization in Manila from August 2015 to June 2016. The National Police Agency began international cooperation to arrest B, and after identifying B’s location at the Korean Desk in the Philippines, they arrested him near his residence in cooperation with the immigration office.

While seeking to repatriate the victims, the National Police Agency dispatched a convoy to the Philippine authorities at the end of June and forcibly repatriated the suspects.

“We will continue to repatriate fugitives from overseas through continuous international cooperation with foreign police,” the National Police Agency said.

Scroll back to top